As any RC fan will know, the HPI Savage changed the game for RC, unleashing rugged Monster trucks – that beg to be backflipped – onto the scene. Over the years the power and strength have increased from the original Savage 21 back in 2002…and with the arrival of brushless power came the Savage FLUX HP.

We know that the phrase “hotly anticipated” is an understatement – For years you’ve been asking us to bring back the Savage FLUX HP, but we knew we had to do it only when the product, supply, spares and time was just right…and that time is now

Standing backflips with a mere blip of the throttle, tire shredding, terrain destroying power that’ll make you run for cover… FLUX fans know where its at! And with a raft of new features and upgrades like the new LCG Chassis Design & Layout, new Twin Clamp Motor Mount, new Twin Battery Boxes, new Center Skid Plate, new Center Gearbox, new wheels, tires, body, rugged bumpers and much more – This is nothing less than: Next Level Savage!!

THE BEAST IS BACK

The Savage started the RC Bashing movement and 2 decades later, we’re still here, stronger than ever and thrilled to standing backflip back into the ring with the holy grail, the jewel in the crown… Ladies and gentlemen, the Savage is back!

A new Savage deserves a new set of brutally agressive HPI Havok 3.8″ wheels, wrapped in yet another addition to the TREDZ “by HPI Racing” Tire rack. The Tredz Terrahex 3.8″ Tires are designed tough, but for ultimate agility and handling at ground shaking speeds

From the Super HD Drivetrain, to the Bulletproof 29/9T Differentials, to the new Rugged Bumpers, every inch of the Savage X FLUX V2 is built to survive and dominate. With beefy suspension arms, ready to take the punishment of big-air drops while everything within is protected by the reinforced thick aluminum TVP (Twin Vertical Plate) chassis, flanked by sturdy, new streamlined battery boxes.

Not for the faint of heart!

Like all HPI trucks, the Savage X FLUX V2 is easy to drive with the included steering wheel controller – but it should be handled with extreme caution! Hit the gas and the 6S FLUX system blasts into action and to the uninitiated things can get pretty crazy VERY quickly! Expect insane standing backflips, while mud, rocks and dirt get slung at you when you pull the trigger!

Once you get used to the power of the FLUX 2200Kv motor, you’ll be able to rip off huge stunts at your local skate park, achieve crazy fast top speeds in empty parking lots and throw up huge rooster tails of dirt! The power of the Savage X FLUX V2 cannot be denied! 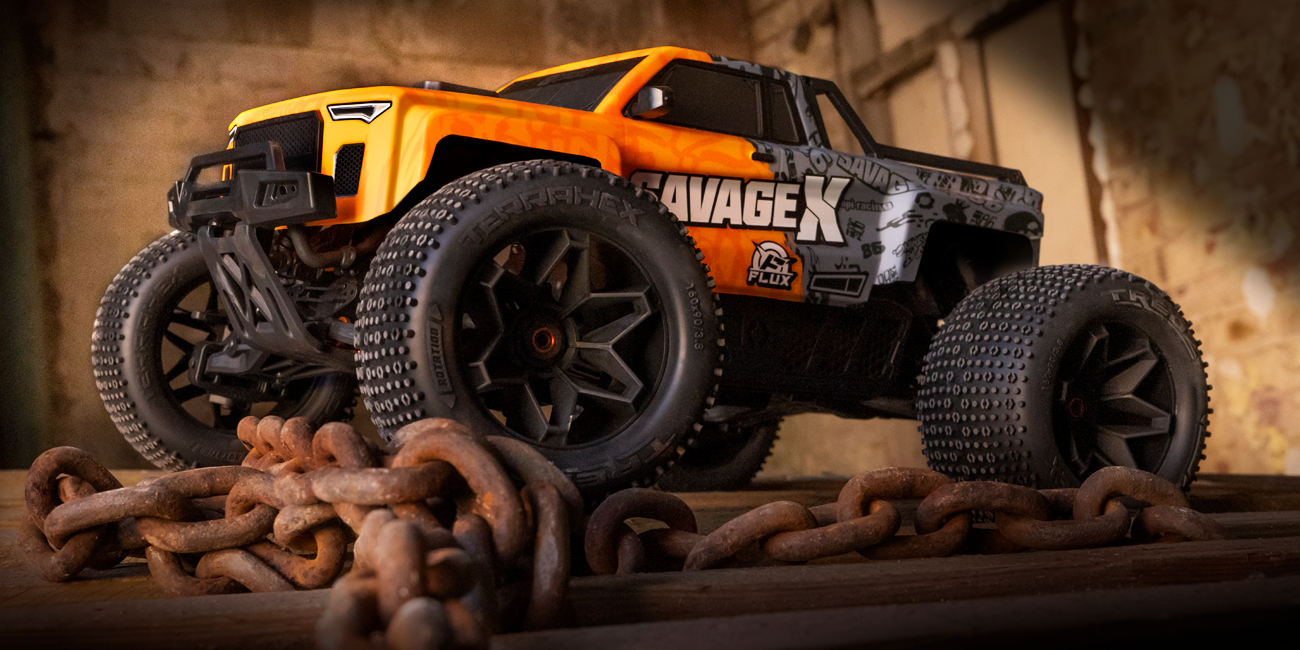 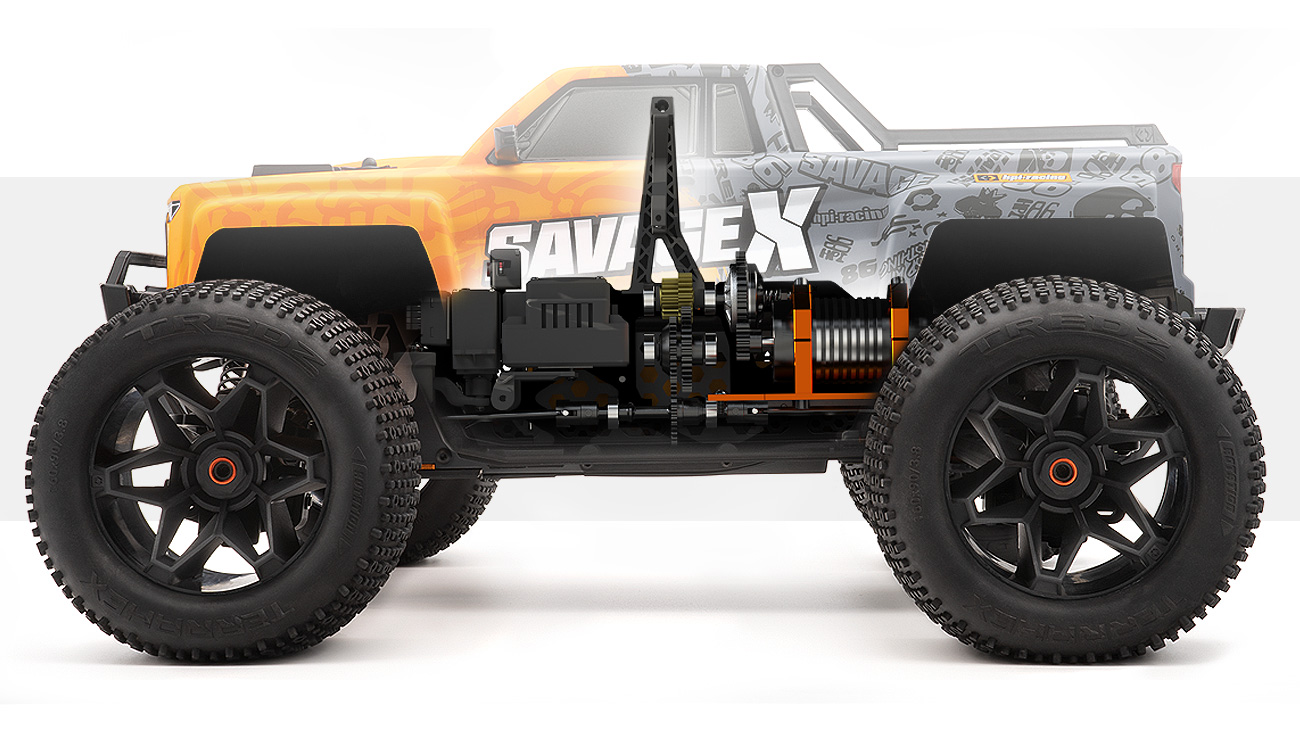 HPI’s designers approached this Next Level Savage FLUX V2 from the ground up with a view to maximising performance and above the new wheels and tires, housed in the TVP aluminum chassis is a new, efficient, streamlined layout – fully optimzed for the RC bash of your life! 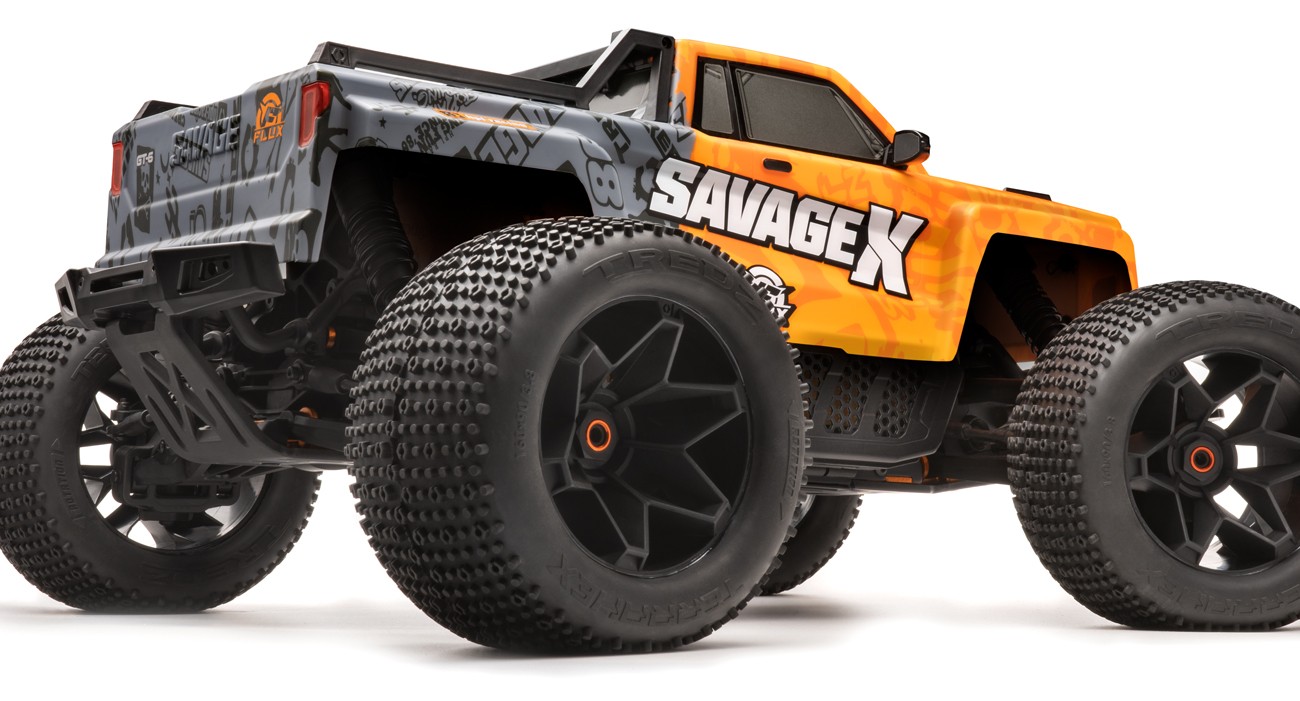 After almost 2 decades of seriously thrilling RC bashing performance, the HPI Savage has earned a reputation for being the toughest monster truck you can find. The Savage suspension has evolved along the way as well. The New Savage X FLUX V2 features the latest ultra-tough, super-thick webbed suspension arms and uprights that can take a barrage of abuse and punishment, giving you plenty of big-air thrills in their stride. 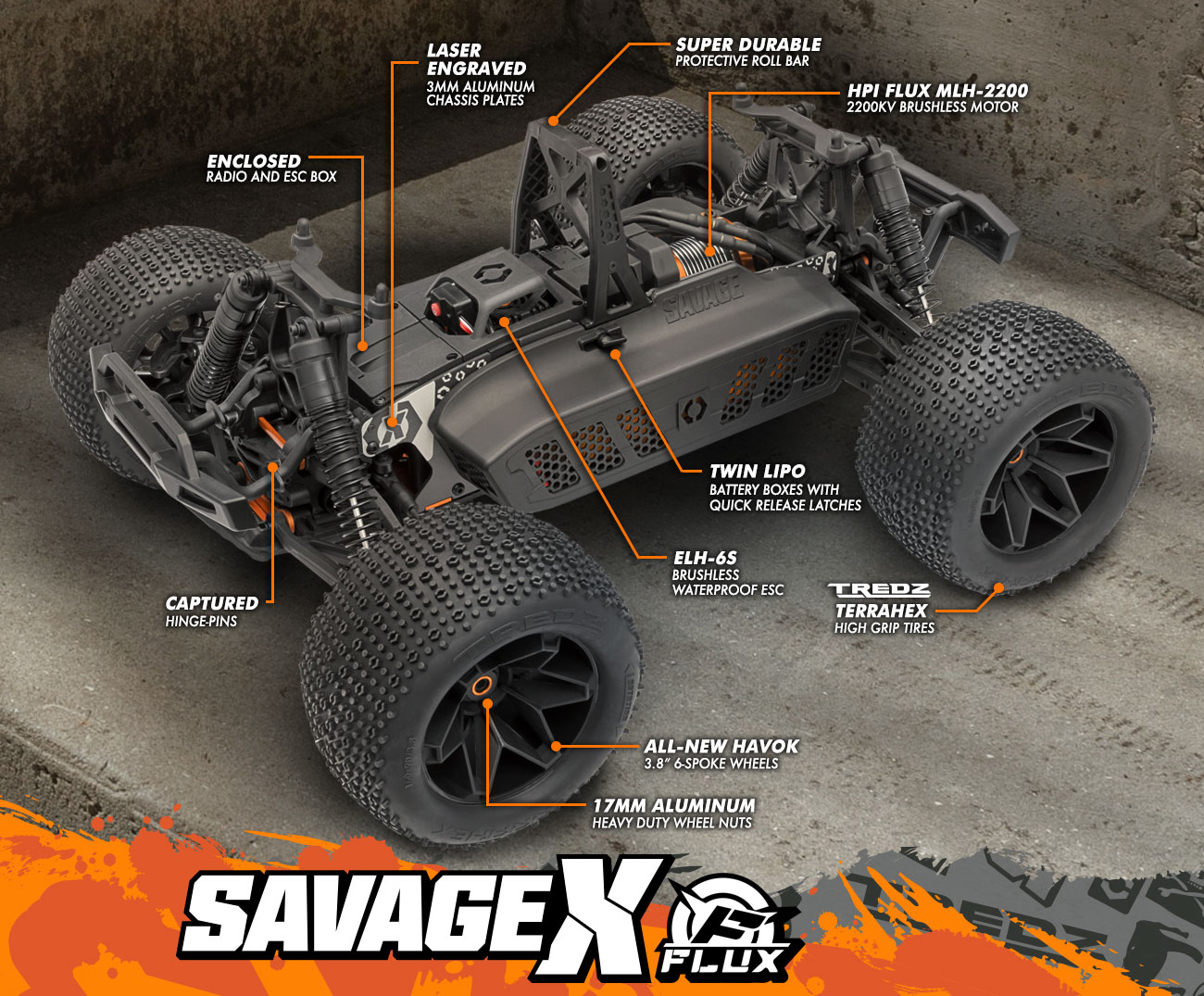 Another new addition to the Savage X FLUX is a super tough center skid plate specified by HPI’s designers to protect the chassis underside and the all-important components housed within. Whilst helping to absorb shocks and protect from impact and strikes from dirt, rocks, stones and debris, it also looks great too!

It’s not just about ballistic action, the new generation of Savages also have usability high on their agenda…  Over the years Savage fans around the world have told us the hinge pins need to be secured in place so they don’t come loose during extreme bashing, well our designers are always listening and have fitted the car with hinge pin covers to ensure they don’t go anywhere, no matter how hard you bash.